My navigation skills let me down again this morning when I failed to find my way to the hotel garage when I wanted to load the bike. I soon gave up and put my bag back in the room and went for breakfast hoping that some food would jog my memory...
...It didn't but thankfully, one of the others did.

Luckily for me, I paired up with my cell mate David for todays ride so the route went much better than the previous day.
The early morning sun shine was nicer to look at than the temperature of the air around us felt as it was a chilly ride for most of the day. I did resist the temptation of plugging in my heated jacket, thinking that I need to become acclimatised to the cold in preparation for what is to come in the weeks ahead.

We took it in turns to lead the ride with me leading us out of the hotel to the motorway, and we got to it without any issues! I chose not listen to any music from th sat nav today, but rather the dulcet tones of my own voice as I sang along the boring motorway sections. The singing inside the helmet is just like singing in the shower, it sounds far better than it really is, but I was enjoying it and that is what mattered.
Once I got bored of my singing I resorted to reading the French signs on the motorway with my limited French language skills, (which goes to the extent of hello, goodbye, please and thankyou, with just a few numbers too) but as no one else could here me, I continued to pronounce the place names in a French accent with ever increasing flamboyancy and even going as far as embellishing it with some hand gestures. Just as I was getting into it though, we crossed into Germany and my fun was ended. I tried the same with the German signs but it was a dead loss so gave up after just a few minutes as my German language skills are prety much non-existant!

A short spell on the awsome B500 soon had me grinning as did some of the other roads after it.

We arrived at the hotel just before 4:30pm thanks to David leading the last part of the route. 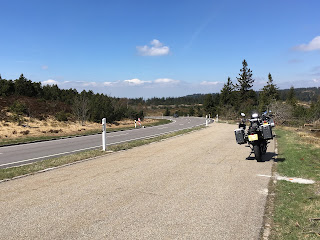 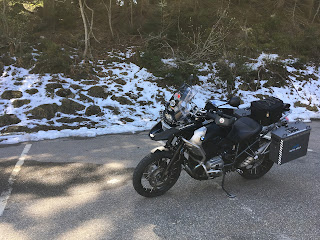 The snow confirmed the chill in the air we was feeling. 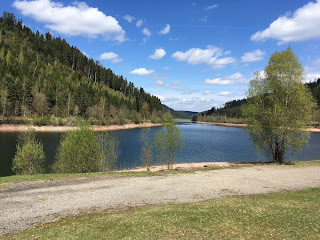