It was our last day in Albania and I still hadn’t got an ‘AL’ country sticker for my panniers. I stopped at yet another fuel station to see if I could get one but the chap inside the shop said he did not have any. Well, that is the gist of it I think. Then whilst I was back outside a couple of older gentleman were talking about my bike and pointing to it. I pointed to the Ace to Ace sticker that had the union jack on it and said that I was from the UK, then pointing to the China flag said I was going to China via the motorcycle. After a couple of attempts the taller guy with the smart jacket nodded and spoke to the other guy explaining this. I then pointed to my GB sticker saying that I wanted one for Albania. The taller guy said ‘AL’ and wrote this on the pannier over the GB. I said yes, that is what I am trying to get but cannot get one. He said, in a round about way, ‘I will get you one, follow me’ and then walked to wards his car. The other old chap said yes, follow him, so I explained this to David my riding companion and he was a bit apprehensive of this. I said I was sure it would be OK, so we followed the tall guy in his Merc up the road, down a side street where we parked up and whilst David kept a watch on the bikes I followed the chap to a shop in a back street. It was kind of like a motorist discount store like we have in the UK and sure enough, on a peg board behind the counter were some ’AL’ country oval stickers just like wat I was after. The chap behind the counter picked one up after being prompted by the tall guy. I said can I have two, holding two fingers up so he picked up another. I got my wallet out and got one of the local currency notes out, but the tall guy pushed it back into my wallet, shaking his head, say no, I get this for you. I felt bad about asking for two now, but thanked him very much. As we walked back to where he packed his car and David sat with our bikes he pointed back in the direction of the garage that we had came from. I said we had to go in the other direction so he shook my hand and I again thanked him. It is moments like these that I really enjoy on these trips, it doesn’t always matter if you speak the same language, you eventually understand each other, exchange smiles and maybe have a laugh over something and it doesn’t have to be long, just a few minutes gives good memories that will last a long time.

From there we rode towards the border where we checked out of Albania and entered Greece, which was a painless procedure and motorcycles even used a separate lane to the cars, which actually looked like a foot patch for pedestrians so we didn’t have to wait in the queue. There was a god half dozen of our group that turned up just after David and I did, and we all got through fine.

We rode some fantastic Greek mountain roads today, and opted for the longest route out of the three (2+1) route options that GlobeBusters gave us in the route notes. This made it a long ride but the roads were generally in good condition with decent amount of grip so I was a happy bunny today. 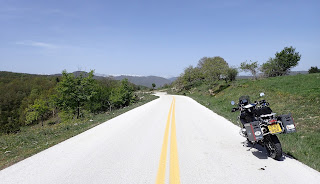 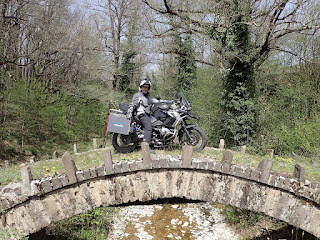 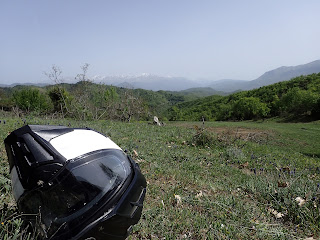 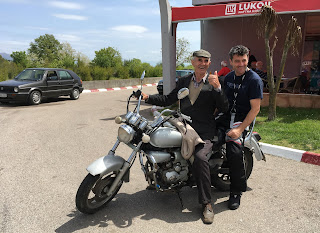