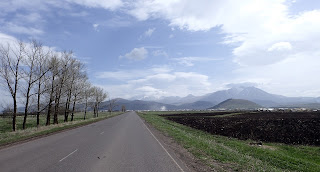 Today was another border crossing, leaving Georgia and into Armenia. Dom lead the procession of bikes out of the hotel car park up the twisty road where Kevin laid in wait with a video camera. Once the smiles and thumbs up where done we made the right turn onto the main road following Dom in the direction of the border.

The old game of dodging the pot holes was in play again as we progressed down the road amongst the local vehicles. I pulled into a petrol station to get some fuel, the guy in front with the two behind  carried on, unaware of the fact that we were not heading in the right direction. This only occurred to me whilst I was filling up as none of the others in the group came by. It took me a while to find the right direction after going backwards and forwards trying to get my bearings but eventually I was happy that I was in fact heading in the right direction all be it on my own. 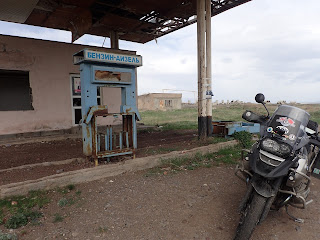 A few miles further down the road I rode past an old disused petrol station and immediately thought, that would make a great photo so I turned around to go back to it. As I rode up to the first entrance I could see that they had dug out a small ditch and created a mound of earth which meant that was not going to be possible to enter that way. So a few yards further was the other entrance which apart from some uneven ground was accessible so I rode in and parked next to the old stripped out pump. I took a couple of photos and then thought I had best be on my way. Having forgot about my earlier observations I proceed to try and go out of the other exit, so I bumped down a small concrete step and then went to ride over the mound of earth until at the last second I saw the ditch. I immediately stopped thinking to myself, chances are I won’t make that as the bike would either ground out or the front wheel would be on one side of the ditch and the rear on the other side, leaving nowhere for my short legs to get a footing and then I would fall over and being on my own so it would be foolish to attempt this. Using my sensible head, I decided to manoeuvre my bike around, however this proved to be a lot more work than I bargained for and soon became out of breath. When I finally got back past the pump I stopped to check for damage as something on the bottom of the bike got bashed going back over the concrete step. Just as I was doing that, the other three went past, obviously having also realised that they went in the wrong direction and turned around. Later on I did make a couple of other photo stops, but chose to park on the on the side of the road! I felt my phone vibrate so I stopped to check and it was a message from Kevin asking if I was OK as the others had reported seeing me at the disused fuel station and thought afterwards that I may have ran out of fuel. I sent a message back confirming I was OK, that I did have fuel and was on my way!

The road to the border had more pot holes in than the moon has craters. I eventually got to the border where everyone else had gone through the first stage of exiting out of Georgia except Kevin who was waiting for me. Oh, and two others that I passed going back the other way as I approached the border. One of the couples on the trip had got to the border and realised that they had left their passports in the hotel room safe so had to ride back and get them. Exiting Georgia was a quick and simple process, but entering Armenia was a different story taking over 4 hours.
The wait at the border was quite tiring for some... 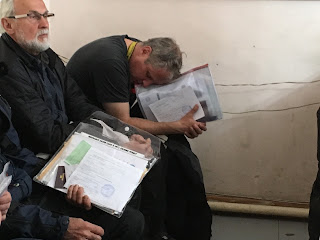 Once through we then had to purchase the compulsory insurance for 20 US Dollars and we were then free to go.

I set off as a loan frog and not gone more than a few miles down the road before stopping to put my waterproof over jacket on and take some photos. Later on that proved to be a smart move as I just caught the edge of a hail storm but soon rode through it and back to semi dry roads. As I entered the next town the sat nav wanted to take me the wrong way down a one way street and after a bit of my own navigation I ended up to close for comfort near a military base but eventually got on the right road heading out of town. The hotel didn’t come soon enough as I was getting rather warm and tired towards the end, but the room had a great shower that helped to make everything great again. 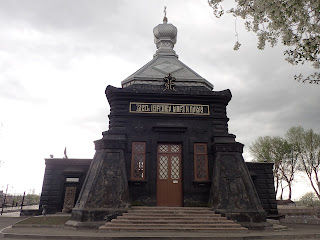 After having something to eat in the evening, we went to the Republic Square where they have a musical fountain display.