I had spent some time in putting extra co-ordinates into my sat nav to avoid some major road works we had been advised about near the hotel where the road was blocked. I was riding on my own today so I could navigate the route without worrying about someone else in case things didn’t go according to plan.

The day started well, it was dry and a nice temperature outside, and getting out of the city was easier than I expected. With the helmet headset plugged in via the inline amplifier with a new stretchy coiled audio lead, I could easily here the instructions from the lovely lady called Serena, that resided in my sat nav. She was on good form today giving me clear and precise instructions which I obeyed them all without hesitation and she never even complained when I went off route to get some petrol. The first official stop was to look at a monastery near lake Seven, which was OK, I got a few photos but not sure it was worth the climb up the steps so I didn’t do all of this attraction and soon got back on the road again.

I had several good photos stops today, with the best one being when I saw a concrete vehicle ramp by the side of the road with a van on top and a guy doing some work underneath it. I had actually rode past but turned around within the next half a mile as this is something I had never seen before and was quite curious. I parked my bike next to the ramp and got off my bike grabbing my camera. The chap that was underneath the vehicle came out and I said hello. To my surprise he said hello back, but he didn’t know to much else of the English language, but that was still more than I knew of his language. None the less we had some sort of conversation and I asked/gestured if I could take some photos, of which he nodded back in agreement. Once again, a random stop and short communication gave my day a lift of joy. 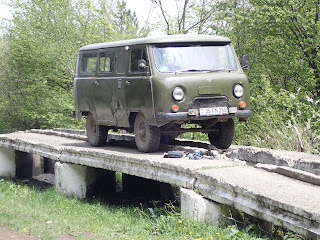 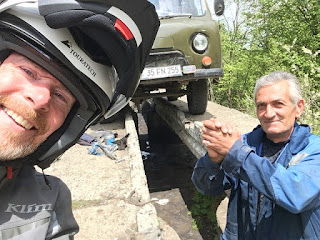 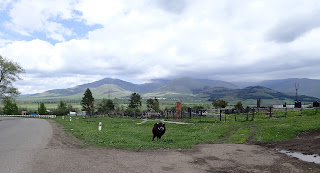 Another time I stopped to get a picture of the scenery and not far in front of me was a bull. I did make sure I could see a rope tethering him before proceeding to get my camera out. But as I pointed the camera in his direction I could see puffs of steam or some thing coming out of his nostrils so i took a couple of shots quickly and made a hasty get away. 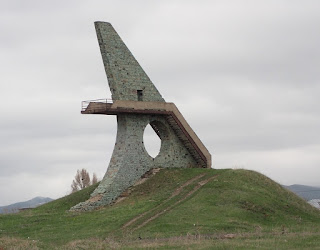 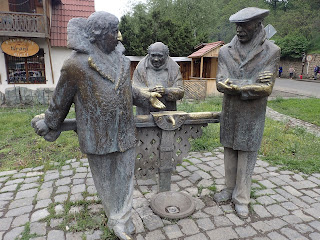 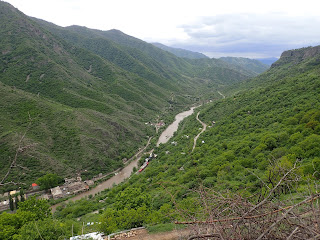 Not everything went well today, I had an upset stomach again for the third or fourth time this trip. I was riding slowly looking for a possible spot to pull over when three of the other riders came past. A few miles further up the road I came across and excellent spot with just the right amount of cover for a dash into the woods. However, as I was getting off my bike a large white Mercedes with blacked out windows pulled about a hundred yards away and close to where I was going to take cover. I cursed and swore and then got back on my bike, but my body had other ideas and really insisted that it must start evacuating some unwanted matter in the very near future. The only other cover I could see was up a steep hill covered in bushes and brambles, and as I had no other choice, I started the ascent with the foliage getting thicker and the gradient getting steeper the further up I went. I climbed up until I could get a spot where this bloody Merc was not in sight to complete the evacuation process. The bloody Merc was still there when I got back to my bike and I had not seen anyone get out, so what the hell were they doing there. As I was getting ready to go again the couple on the Harley rode past, I gave the thumbs up to say I was OK and then shortly afterwards the support van drew up behind me so I got on the bike and got going again.

Srena's instructions kept coming just as I expected them to so all was looking good for the navigation today and I even got a couple more great photo stops too. But not everything was as I had thought it would be. I came across some roads works and followed another vehicle through. But the road works went on and on with most of the road surface removed to just the earth base. It was fairly firm underneath with just a bit of soft stuff on top so I wasn’t worried about getting stuck, it was just concerning that I was riding around all the heavy plant machinery as they continued with their work. This certainly would be allowed back in the UK or anywhere Western Europe, but it seems to be the norm around here. I got to one place where a guy pointed for me to get off the road works and take another road which I did, but a few miles later I stopped as this was taking me completely in the wrong direction and I would be miles and miles away from where I needed to be and to top it off I had less than half a tank of fuel so after another emergency evacuation procedure I turned around and went back to ask the chap again. Of course he didn’t speak a jot of English so I pointed out the hotel name and address that was on my route notes and he and some other chaps had a discussion and then told me to go down the road works road where I was heading before so onwards I went. About a mile later I saw the support van heading towards me. Bloody hell, I said to myself, don’t say I am going in the wrong direction. I stopped and waited for the van to come along side where Pete then confirmed I was heading in the right direction and that he was going back to look for the couple on the Harley! As I arrived at the hotel less than a mile further down the roadworks, Kevin was there waiting at the car park entrance. I asked him if I had got my co-ordinates wrong but he said no, the road works had just moved on to this section now and that everyone else had come through it too. The hotel let us use a hose to wash off our boots and trousers before we entered but there was no point in washing the bikes as we have to go back out the same way we came in tomorrow!

Overall, the work I done last night sorting the route out on the sat nav worked flawlessly, and for a change, a lot of the other riders seemed to have got lost today so I just smiled to myself. It will be just still water and a few plain crisps for my meal tonight so hopefully I will be OK in the morning.