As usual now, we all left on our own or small groups and re-grouped just outside of the border at a fuel station. I filled my tank up to get rid of my last few Lari notes and then went inside to buy some snacks and drink in preparation for lengthy border process. Upon sorting everything out back at my bike I realised that I had a large pocket full of coins from the various countries we had been in. I went back in to the shops to ask where I could dump thethis money but the lady didn’t understand so she got one of the forecourt attendants who spoke a tiny amount of English to come over. I gave him the large handful of coins and said  I didn’t want them anymore. He asked if I wanted them changed, I said no and that I just didn’t want them. He look puzzeled and kept asking what I wanted, so I said nothing, I just don’t want the heavy weight of coins in my pocket anymore and then he finally realised and I could see the amazement on his face as to why someone would want to give away money. I said thank you and walked out!
Then as we all road off together to the border we stopped near the sign that says “Azerbaijan Border – Good luck” where we all took some photos before continuing on. I was not sure what they really meant by the “Good Luck” part, was it that we will need it, or are they just being polite? 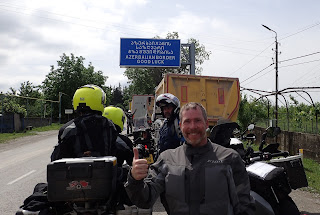 The border process of getting out of Georgia was certainly quicker than getting into it, but the lengthy wait come on the Azerbaijan side where it took over 3 hours to complete.
The ride from the border was OK, at first the roads were good, but then gradually got worse. Not too many actual pot holes but it was a bit bumpy where the pot holes had been filled in. I was riding down one fairly straight road thinking the scenery is OK bit not spectacular and then looked over to my left to see a wonderful view on the snow-capped mountain tops poking out above some clouds.
When we arrived at the hotel it was an interesting last 100 yards or so as the road was a fairly steep and made of large stones. Although the hotel car park had a smoother surface, it too was rather steep and I got to use my rubber side stand puck in order to prevent the bike leaning over too far.
I gave my beared a good trim, which seemed to be the straw that broke the camels back as the water in the basin wouldn’t drain away. I looked underneath to see if there was a ‘U-bend’ that I could dis-mantel and look at but there was just a flexible pipe that was twisted and kinked. As I went to straighten this the pipe that connected to the underside of the basin plug hole came off in my hand. This at least allowed me to straighten it better and check for blockage before replacing it. Then I un-screwed the plug top to see that the plug inners were blocked with lots of hair, and it was a lot longer than any of mine! Once this was cleared and put back together it all drained much better, although it did seem to leak a little due to the missing screw coupling underneath, but this then matched the leaking bath and the leaking toilet!
After the nightly meeting a few of us went out for yet more delicious chicken and lamb kebabs! 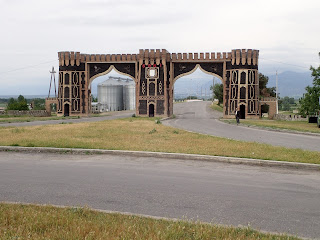 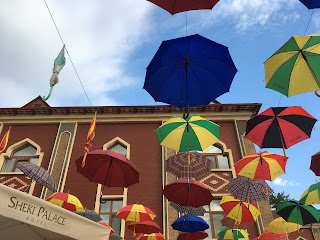