The good news was that Kevin had secured us a place for the next day on one of the ferry boats that sailed across the Caspian Sea, the bad news was that from arriving at the dock to reaching the other side of the water, and then getting through the Turkmenistan border was a notoriously slow process.
In fact, it was about 10 hours waiting at the first part of the dock where we was also joined by a group of motorcyclists on KTM’s as well as a few other foot passengers. Time was spent chatting, Pete the van man got the kettle out for a brew up and the French guys provided some nibbles for lunch that was much appreciated whilst we watched TV where they were showing the “4th Islamic Solidarity Games” that was actually being held right now here in Baku. 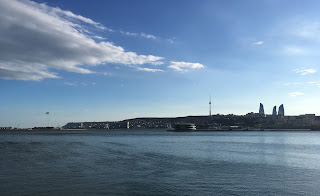 The next stage of the process was to ride our motorcycle around to another part of the port where we then had to go through a customs clearance before waiting another 5 hours to board the boat. 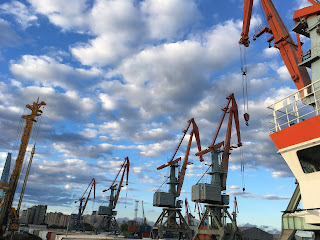 Eventually we were called to ride onto the ferry and park our bikes before taking our camping bag to our allocated cabins. The cabin I was in had three bunks beds, sleeping six people plus a wash basin, a small table with two chairs and about six square feet of floor space, so it was rather cosy! 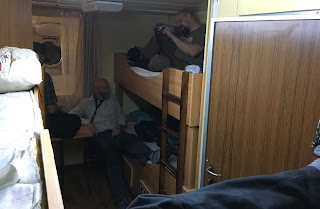 That evening there was a meal of soup followed by chicken and rice served in the canteen which we all devoured having not eaten a lot that day, then we had a walk around the decks to take photos before ending up in one of the other cabins where there was much wine and whiskey being drunk. But late that evening after we was all tucked up in our cabin, Dom came knocking on the door wanting some of the guys bike keys and then half hour later one of the crew came knocking when most people were asleep saying something else about the bikes that I couldn’t understand, so I got dressed and said show me. When I got up on deck I realised that there was chaos being caused by some local people which I couldn’t work out if they was boat crew or dock crew, insisting that we moved all the bikes to a different part of the deck so they could load some more containers on. Once the bikes were moved, there was a small group of us that continued with strapping down the bikes in the rain getting back to our bunks just after 1am. But that is all part adventure travelling, getting stuck in and doing whatever is required at whatever time working as a team to overcome these sort of situations. 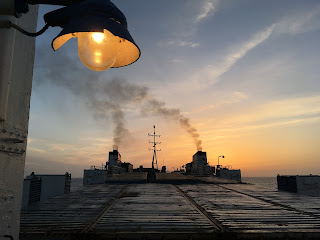 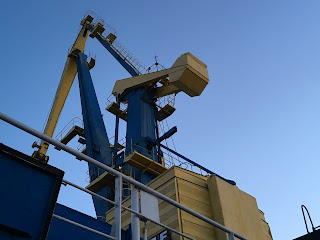 The next morning when I went to breakfast I learnt that we didn’t set off from the port at Baku until just gone 6am so it was looking like a long day ahead of us and another night on the boat. The crossing itself took about 11 hours and according to my sat nav we was travelling at 10mph. Once we got to the Turkmenistan port is was another several hours before they unloaded enough of the containers and truck trailers so that we could get off ourselves.


We rode off the ferry at the Turkmenistan port and all of us entered the customs building to start the long process of paperwork going to office after office, sometimes with the same piece of paper to get another stamp on it by someone else who is qualified to use that particular rubber stamp. We had various fees to pay as well, including a bridge fee for which there was no bridge, but it was best not to reason why and just pay the 15 US dollars and be done with it. Then just as we thought we was all done and we could move on to getting our bikes searched by customs they said we had to wait for the KTM group as we all rode in together, they wanted to check all the bikes together, so we waited some more. We eventually rode out of the Turkmenbashi port around 4pm and Kevin said to us, ‘next time you are waiting at Heathrow for 20-30 minutes going through passport control and people start complaining, you can say this is nothing compared to Turkmenistan’! 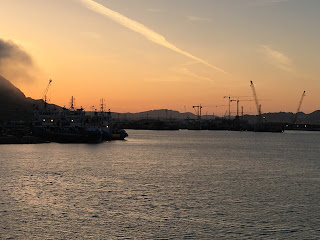 All in all, from entering the port in Baku, then going across the Caspian Sea to leaving the port in Turkmenbashi, was about 54 hours for what I can’t imagine is more than 270 miles.
Luckily it was only about 5 miles to our hotel where I was looking forward to a nice shower, but upon running the taps the water was a disturbingly looking brown colour and took several minutes before it ran clear. But never mind, at least the water drained away so I didn’t have to look at the plumbing!

Later that evening we all went via taxis to a local restaurant where we had meat on a stick and salad, followed by ice cream and vodka.
Posted by GP at 11:55