We left the White Marble City heading north across the desert to our destination of wild camping.
The quality of the road went down, with larger pot holes, whilst the temperature went up, to around 44 degrees Celsius, not the best combination for riding a large adventure bike in full motorcycle gear. There was a few photo stops including one where we saw a camel with one of its young being led by a young local guy down the other side of the road.

Also along the way we stopped at two old gas craters that were left here by the Russians. The first one had water in the bottom with signs of gas bubbling to the surface and as you got closer to the edge you could see the familiar site of plastic bottles all floating together, such a shame but a sign of the times I guess. The second one had boiling mud holes with a few small pockets of gas burning away.

Unfortunately there was another motocycle casualty of the trip today, as one of the 1200GS bikes took a large wack and the driveshaft housing broke, so this bike and the rider ended up in the support van and will probably be there until the parts arrive to fix it. Thankfully the rider was not hurt at all.


We eventually got to the camp site where our tents had already been setup for us and the local people were cooking our meal, which was delicious chicken with rice and tomatoes. 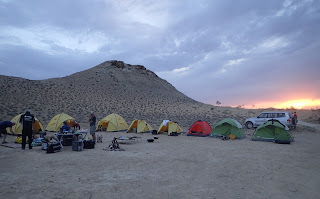 Later that evening just before it started to get dark, we was driven out further into the desert by 4WD vehicles to see ‘The Gates of Hell’ which was a massive old gas crater that went terribly wrong and has been burning for over forty years now. Upon first sight of it when we drew up my jaw dropped. It is huge, and when you get close to it and the wind changes direction it is also very hot, so much so that you have to turn your back on it and walk away. I walked around the perimeter of it taking photos but am sure they will be nothing like actually being there, just a good memory trigger. 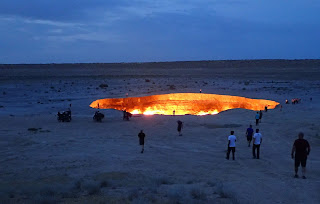 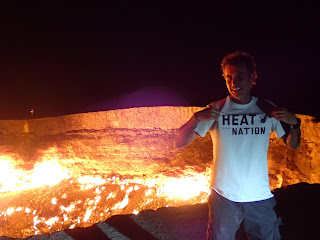 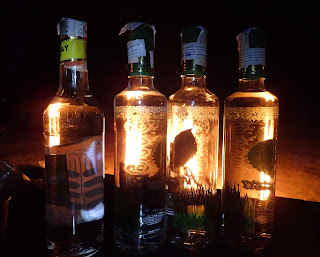 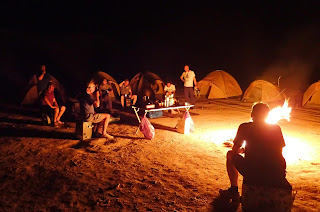