I was woken up a few times in the night by the sound of my tent being battered by the strong desert winds. However it was not until the daylight illuminated the inside of my tent that I could see another horrendous effect of the winds; everything was covered in a fine layer of sand, and I mean everything, from my open clothes bag and camping bag, to my motorcycle jacket and trousers. I shook off the sand and got dressed into my bike gear and then preceded to un-pack my bags and get rid of as much of the sand as possible before re-packing them, all whilst more sand was being blown in. When I got outside, everyone else had the same problem and due to the winds still blowing the planned cooked breakfast was cancelled so it was just a quick breakfast and off we went on our way. It was quite funny as everyone had sand coloured hair, (well those with hair that is)!
The good thing was that it was much cooler now but the riding was tough so it was good to stop for the odd photo or two, if only to have a break from the wind and to rest the eyes from the immense concentration it took to scan the surface for a path through the numerous pot holes and sections of missing tarmac. 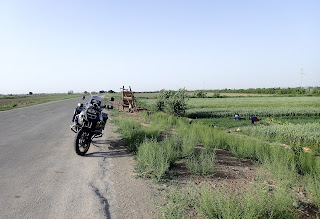 We all re-grouped at a fuel station ready to ride as a group once again to another border crossing. So we all lined up to exit Turkmenistan and patiently waited while we were processed one at a time with our documents, then we had to go back to our bikes where they were searched by the border guards and after that they said they are going to lunch so we would have to wait an hour to get our passports stamped so we could exit, which of course we did as we had no other choice, and then rode through the no-man’s land to get to the Uzbekistan border. 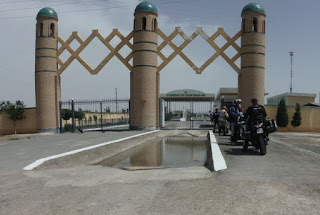 Now this was a long slow process which lasted quite a few hours in the now scorching heat where the only entertainment was watching some of the border guards mixing up concrete to badly re-construct part of the entrance path and another doing some sloppy painting, but eventually the torture was over and we were set free to roam the roads of yet another country. Well the road we was routed on was in a terrible condition and once again we had to negotiate our way between numerous large pot holes and some sections of no tarmac at all, in fact the gavel sections are probably better than the paved sections. I arrived at the hotel, hot, tired and drained of energy looking very much forward to having a nice long shower to wash off the last 24 hours coating of sand that was all over me. 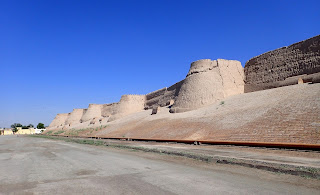 On our day off we had a walking tour of the old town of Khiva... 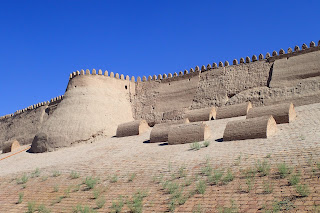 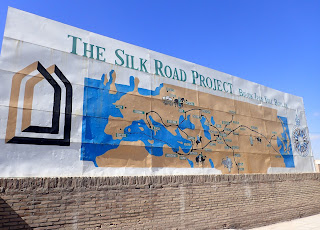 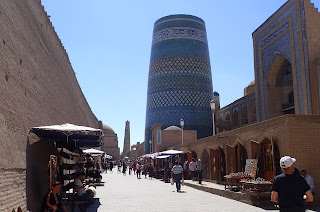 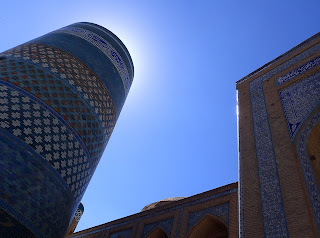 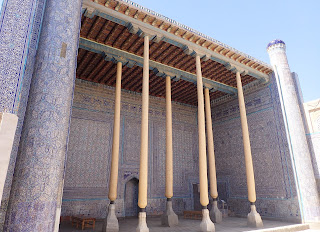 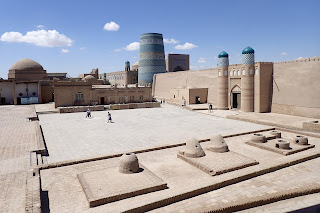