It was an early start to the day in order to get to the border crossing where it was expected to be another slow exercise. The Uzbekistan border guards searched our bikes and luggage probably more thoroughly than when we entered. They were really only interested in two types of thing, drugs/medicines and photos/videos. They first found some multi-vitamins that I had stored in a plastic bag and this raised concern until I got the small bottle of them out and showed them the label and that they were the same thing. Then I had to power up my laptop so they could check that, but I just showed him the standard ‘Pictures’ and ‘Videos’ folders in the user profile which were empty as I store them elsewhere so he was somewhat disappointed. He kept saying videos of sex and I said, ‘sorry, no porn on here’! He then wanted to see my iPhone and spent an age just looking all through the photos asking me where I took this one and that one, so I just said some random country names we had travelled through because I figured he probably didn’t know anyway. That was still not good enough for him so he then asked where are the pictures of home, which I showed him some photos of my bike on my driveway at home, after a few more minutes being frustrated that he didn’t find anything he wanted to see, he handed my phone back and said close it all up and go.

I was glad to leave Uzbekistan, of all the countries we have visited on this trip, this was my least favourite. I was glad to have experienced it but wouldn’t choose to come back again. 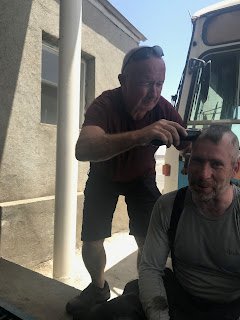 Our border process still wasn’t over as we still had to enter Tajikistan and after going through passport control they then had some sort of power cut so could enter any vehicle data into the computers and we had to wait with our bikes outside in the scorching temperature. So Pete got his clippers out and offered haircuts to anyone interested and I took him up on the offer and had a very short back and sides haircut.
When we left the border we rode in convoy to the hotel with our fixer in the support van up front due to us all having only a temporary import certificate for all of our bikes. It was not a long ride, but it was hot and I struggled to keep awake but being in a convoy I couldn’t really pull over so I just battled the urge my eye lids had on closing to maintain a limited amount of vision in order to get to the hotel. The hotel was very nice and we were told to make the most of it as we won’t be seeing these sort of facilities over the next week.

On our rest day was spent having a lazy start to the day with a fantastic buffet breakfast, followed by a trip to the local supermarket before taking the bikes to the local fuel station for a treat of 95 grade fuel and a thorough bike wash where the chap washed my bike about 3 or 4 times, as after each wash I would look round and point out a place he either missed or didn’t clean to my required standard, and each time he seemed to enjoy cleaning more and more just wanting to make me happy.

Later that evening we learnt that we had all paid twice the local rate for cleaning cars but that still only equated to £5 and if it made their day by seeing some different people then made a bit more than usual  then I think it was well worth it. And as Kevin puts it, ‘You are helping the local economy’. 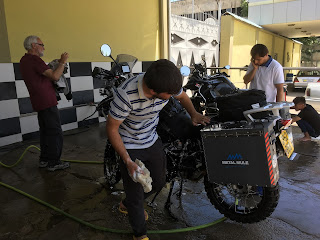 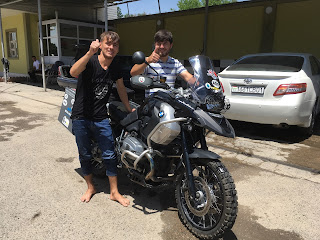