No express way today which meant we could ride on our own again and stop when we liked. Again there was not much to photograph along the way so it was not until we reached the destination on the coast of Bohai Bay that we stopped for a photo of our bikes near the sea. 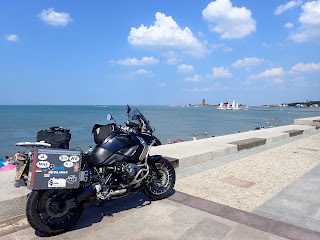 So apart from the Caspian sea, which is an inland body of water, this meant that we had finally crossed Europe and Asia from the coast of France to the coast of China, and looking at this on the map shows the massive scale of this trip. 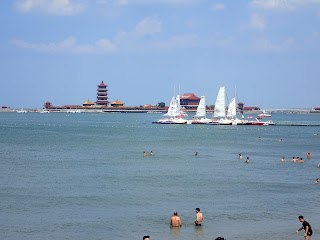 The next day was a day off from riding, so most of us went off to visit the local tourist attraction of Penglai Ge. We had an English speaking guide for the first part although I still found here difficult to understand, but I was happy just taking photos and grabbing the odd bit of information here and there. We tried to get a cable car up the hill but they closed this service down when it clouded over and the winds increased as they thought there might be a storm coming. Blimey, do they actually have a health and safety policy in place and care about the public? We then continued on without a guide to the old boat museum which was actually a very nicely arranged collection of some very old boats and artefacts.
Posted by GP at 09:08