I set off early today, refreshed from a good night’s sleep, but even this was not enough to enable me to navigate my way out of town easily. I didn’t agree with the GPS to start with so tried going another way, but this took me in a circle, but even when I admited defeat to the elctronic lady and follow her evry command, I found myself going in the opposite direction to what another rider was. But with persistence I eventually got onto the right road and left town with a sense of relief and amazement.

It never ceses to amaze me how much difficulty I have leaving a city first thing in the morning, something which at the early satge of this trip used to annoy me, yet now just amuses me and I go along with it wondering how many U-turns i will make as I try and figure out which way to go. I think part of it is that my GPS doesn't like mornings and takes a while to wake up and give me the directions. However, I cannot wait this long so just make my own decision as to whether I turn left or right to start with. Then if I realise I am going in the wrong direction I put off doing the first U-turn thinking I can work out another way, but this often does not go well, with me giving up, turning around and then looking for the purple line. It just gets a tad embarrising if I see people following me, though at this stage of the trip I am sure they have worked it out not to trust my navigation early on! 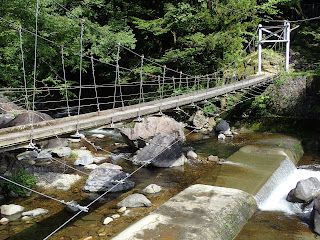 It was not long before my first photo stop of an old  dis-used foot bridge that caught my eye and then within another couple of miles some flowers lining the side of the road. Now, I am far from being a garden lover, but the sight of the Marigold’s pulled me up as they reminded me of my grandads and parents gardens. The smell was distinctive and with another red flower (that I have no clue what it is called) further along, I thought this would make for a good photo with my bike alongside just a little further up. 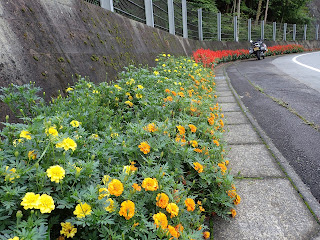 It was just a bit further along where I caught up with two of the others from our group so rode with them after that through some great mountain roads. That was until we lost one rider, and then there were two! 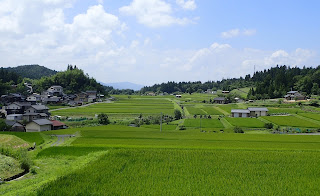 We stopped off at a historic village which was very popular amongst tourists, where we enjoyed a nice cold drink in an air conditioned restaurant and also met some of the other riders there too. 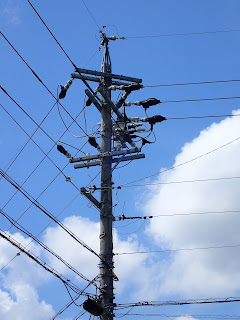 Now power lines have been plaguing our photos for the last 3 months but I did see one photo opportunity where the power lines actually made for a great subject, well in my mind anyway! 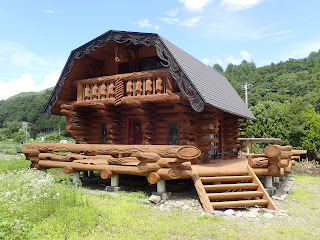 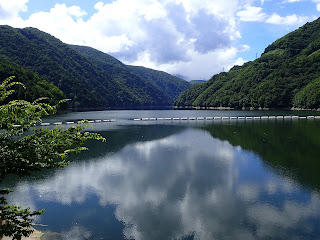 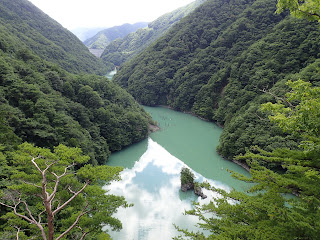 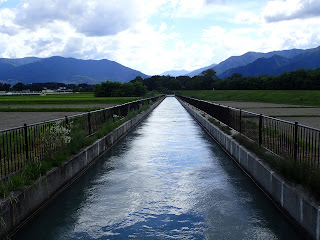 At this point the road ran out, but so as not to waste the moment, I took a photo before we found an alternative route.
Posted by GP at 22:41