It was an early start to leave Xi’an but I forgot to delete a rouge waypoint so ended up doubling back and then getting lost in the city. I rode onto the express way where motorcycle are not allowed to go as I was hoping to get away with it but at the toll booths I got stopped by the policeman and told that I could not proceed. He then directed me down the wrong way of the slip road and told me to take a right at the end but before I left he wanted a photo with me, of which I obliged!
I done as he suggested and was soon on the road I wanted and heading in the right direction so that was a bonus.

There was a lot of roadworks on the G310 road today and much of the time the road was blocked to traffic, but then there is always room for a motorcycle so I continued on the road going past the men working steadily.

It wasn’t a scenic ride today, although I did stop for three photos. The last part of the ride into the city was exciting and I was glad to stop riding when I reached the hotel. 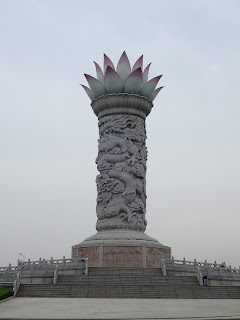 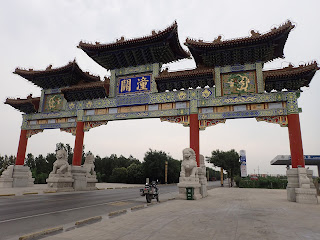 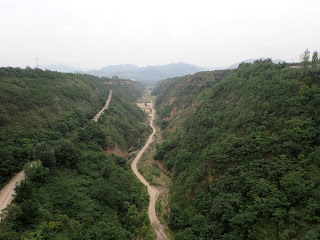 Oh I would have loved to ride the dirt track I could see below the bridge !
Posted by GP at 09:57