With the help of a local man who runs a motorcycle club, we got permission to ride on the express was as a group for the final part of the ride to Beijing. The road surface was extremely good and we maintained a nice steady pace for mile after mile. However, there was one section which slowed to a crawl for everyone on the express way, and that was the bloody police check point. WTF is that all about, have they lost the meaning of the term ‘express’? Why not put this at the end just before getting into Beijing. Of course this was all made worse for us motorcyclists because of the heat and the gear we was riding in, I guess those people in air conditioned vehicles didn’t mind as much!

Once we got into the city of Beijing we still had several miles of traffic to deal with but this was more bearable today knowing that we would be shortly celebrating this poignant moment of the trip.

Just before we reached our destination, we all stopped to attached some flags to our bikes, which was a flag of our own country and a China flag, but it was at this point we learnt that one of the riders had just had a small bump with a car where their pannier caught with the car bodywork and so that rider was delayed whilst waiting for the police to turn up and process the incident. The rest of us with our flags attached carried on and rode another half a mile or so to our destination.

It was 78 days ago that we departed with a great send off from the Ace Café in London and in a that time we have ridden 13,000 miles to now arrive at the Ace Café Beijing where we received a fantastic welcome from the Ace staff and local motorcyclists of Beijing, all cheering and clapping as we rode in to the parking area.

As we got off the bikes we were given bottles of sparkling wine, which we promptly shook up and sprayed over each other before drinking the residue left in the bottle. We were then given some energy drinks which were not all that nice so we washed that down with a nice cold bottle of bear.
Then there were some short speeches on the outside stage from various people of the British Embassy followed by a the Ace Café franchise owners and finally Kevin Sanders, our trip leader who called us all up one at a time to join him on stage to celebrate this magnificent achievement of making it to this epic point of the trip. 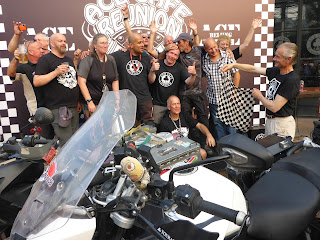 After this we had a buffet meal provided for us in one of the old railway carriages (air conditioned too) and this was all very nice especially the fish and chips. The beer and wine continued to flow all afternoon and into the evening as we popped in and out, mingling with the people outside every now and then before going back inside the air conditioned carriage to cool off again!

I can only guess that this is what it is like to be a film star for the day, with so many people coming up and asking to have their photos with us throughout the rest of the day and wanting to ask us questions about us and the trip!! 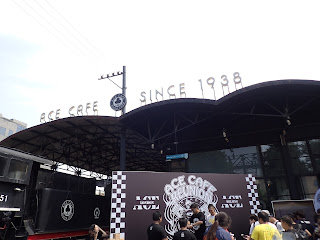 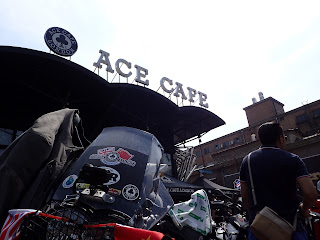