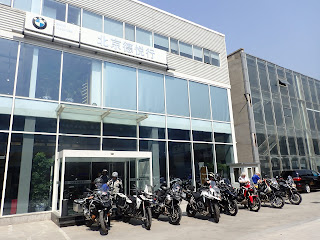 It was an early start in order to get to the BMW dealer to collect our bikes and be on the road by 10am.
The dealership opened their doors earlier than usual for us and after another look around their store where some people made more purchases of new kit, especially the vented clothing, we then payed our bills for the service work and collected the keys for our bikes ready to load them up ready for departure. The local bike club gave us some nice technical wick away t-shirts for us to wear which was kind of them and we wore them for the group photos outside.

We had been told that we could use the express way going out of Beijing but had to stay as a group following the van. This was a good way of getting out of the city rather than battle with the city traffic for mile after mile but the price we paid for this was losing our freedom to stop along the way whenever we liked. Not stopping for photos was not too bad as there wasn’t a great deal to see, but being unable to stop when tired was tough. There was planned stops at the services to break up the journey and give us a rest, but with the temperature reaching 42 degrees and the monotonous motorway type riding,  my eyes got very tired way before then, and no what I did, I really struggled to keep alert.
Posted by GP at 09:15