It was a dry start to the day and if you looked really hard above, there was a hint of blue sky above the thick layer of smog. There was also a sense of extra joy in everyone this morning and this was probably due to it being our last run on our own before the group ride into the Ace café at Beijing. So close to that big moment, yet still plenty of time for it to all go horibly wrong. 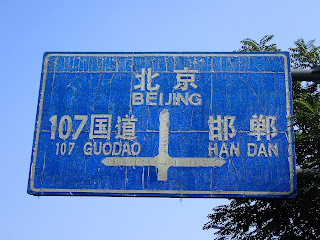 I did stop at the first Beijing road sign I saw for a photo. The sign was well weather beaten but it still made for a good shot.

We were riding down the G107 amongst all the big smelly trucks puffing out black smoke, each one adding a bit more to the smog around us, when everything came to a grinding halt. Trucks queued back and there was nothing coming toward on the opposite carriage way so we suspected it was something serious. As we rode down the side of the queueing vehicles and got to the front we saw some cars heading off down a small road to the left so we followed thinking that the locals would know a way around this snarl up. But the further we went the smaller the road got and before long we found ourselves riding some narrow concrete roads near some small villages. It was becoming clear that the cars up ahead did not know where they were going as they kept stopping to talk to the locals and ask for directions. Eventually even the concrete run out as we bumped our way around on a dirt track between the fields of crops and I was convinced that we would all be turning around at some stage because there were less cars behind us meaning that some of them had already given up on this wild goose chase. But with perseverance we came back to a concrete road, then through a flooded section of road near a farm before getting onto a tarmac road with other traffic on it, hoorah for that. 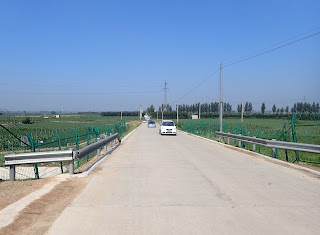 After a bit we were back on the G107, but not before I took the opportunity to grab a photo of us off route. That sure was an adventurous detour!

We enjoyed the G107 while we could with not many trucks on it as most of them must have been still held up, but this didn’t last long enough. 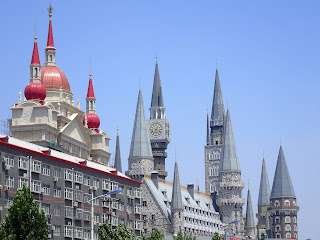 There was another photo stop later on for some fancy roofed building which was probably a palace or something, then another stop for another Beijing sign, only this time just in Chinese writing but indicating that Beijing was just 250km away. 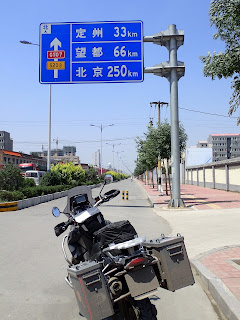 The temperature rose to 40 degrees today which meant it was a very hot and sticky ride in all of our motorcycle clothing, but later on it came back down to a mere 37 degrees so that was fine ;)

Before arriving at the hotel we stopped off to get the bikes washed so that they are looking a little bit more respectable for the ride to the Ace tomorrow.
Posted by GP at 11:31