Despite the not too long a mileage day, it was certainly the toughest days riding yet. I had my first fall off the bike whilst riding... 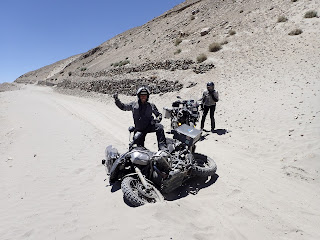 I rode over the brow of a hill and noticed some riders down the bottom  parked up and then noticed a couple of them waving to me and the rider in front to slow down. As we got closer we could see that the road was covered in sand. Thinking that it would be just a few inches deep I stood on my pegs, took a straight line and opened the throttle. Well I didn’t get far until my front wheel sank in the very deep soft sand and whilst I battled with the handles bars and giving it some more gas it all went pear shape and before I knew it I was off the bike in spectacular fashion. Kevin and one of the other riders kindly gave me a hand to pick up the bike and get it ready for me to ride it out, which thankfully I did without any further problem. Apparently, as it was very deep sand I may have been better off just sitting down and paddling my way through, oh well, live and learn as they say. However, I was not the only one to fall in the sand and even the van got stuck in its first attempt, which Kevin claims counts as an off for the van! 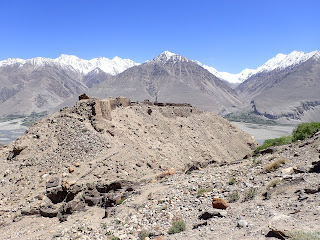 Another challenge was riding up a steep gravel road with several switch back bends. Not everyone attempted this but those that did were rewarded with an amazing view of the ruins of an old fortress and the mountains in the background. 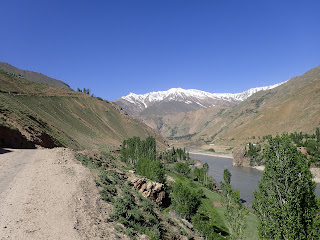 The road down into the Wakhan Valley had a few paved pats but it was mostly gravel and sand. The scenery was fantastic and I stopped many times for photos. 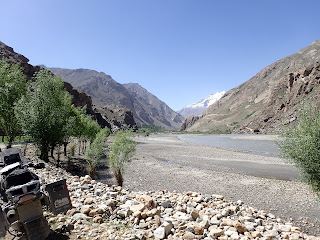 There was three other occasions today where I thought I was going to come off, twice in the sand and once on a gravel hairpin bend going uphill. Boy was glad when we reached our home stay as I was absolutely cream crackered.

In the evening meeting it was totalled up as 11 drops between everyone that day!