We were all warned that the first part of the ride involved going up a steep narrow gravel road with very tight corners and a loose surface so the two bike leaders will be on hand at the worst two bends should anyone need assistance. I was the first to go but my first challenge was on the straight part getting past the goats and the cattle that were coming down the hill. I found the tight corners fine and was soon roaring up the track with amazing views and once at the top I found an ideal photo opportunity which I rode past for a few yards looking for some firm level ground to stop on. 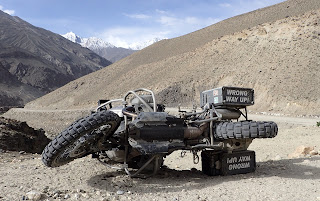 However, this stop did not go according to plan and I brought the bike to a halt too close to the edge of the track where the grouns slopes away so that when I put my right foot down there was no ground there and the bike and I fell to the right. Luckily for me the bike went flat on its side and didn't follow me as I rolled down the embankment landing face down.. My only injuries was some bruises but got up OK all be it a little stunned at what just happened. Then I realised that the bike was still running so I clambered up and flicked the kill switch to cut the engine before proceeding to take the necessary photos of the bike laying down!!


I waited several minutes but no one else came up the track so I removed the panniers and rear luggage bag to make the bike lighter so that I could lift it up myself, but after two failed attempts I waited until two other riders came along where between us we got the bike upright again. I then left the bike standing for another 10 minutes for the oil to settle back in the engine before starting the engine and riding off. 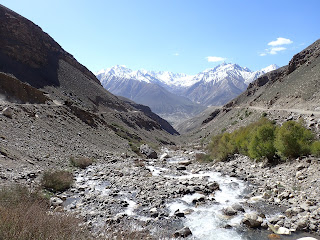 The Wakhan Valley mountain roads proved to be tough going again with the deep gravel, sand and ripples of the harder compact areas giving both the rider and bike a really good battering. On top of this we had been climbing in altitude to over 4000m so the air was getting thinner making every movement more tiring. 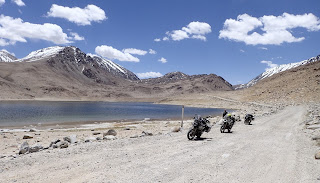 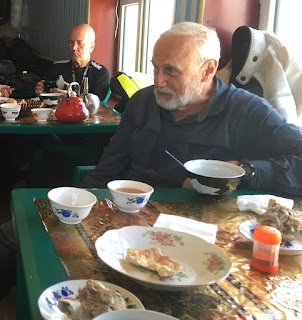 Our lunch stop was in a local place where we had some soup with a yacks bone in it. I say bone because there was not a lot of meat and although I did try it, once is enough thanks. 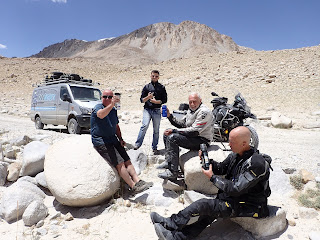 I never thought I would be so pleased to see tarmac as I was when we arrived at the main road, however this excitement was soon quashed as the state of the road was awful with lots of big dips and pot holes requiring concentration to avoid or ride them at an appropriate speed.

By the time we had reached our accommodation I was completely drained of energy and feeling cold too as the heat of the sun had gone leaving the higher altitude climate to make its presence felt.
Posted by GP at 14:15