I went outside to use the toilet and noticed the temperature was rather cool 4 degrees. Looking into the distance you could see that there was new snow on the mountain range overnight as the snow line was further down the mount side now.

My first problem of the day was that my sat nav had stopped working. No time to look into the problem before we set off so I rode with another rider and will investigate the problem this evening. 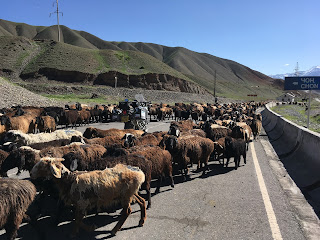 It was relatively a short ride to the hotel in Osh today, but as usual a few photo stops ate up the time along as did the herds of sheep and horses
we had to stop for which were being herded down the road by the nomads. 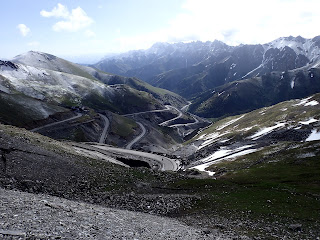 The first part of the journey had us riding up a mountain pass of 3,600m and as often in the last few days, stunning mountain views that no camera can really capture the essence of being there. 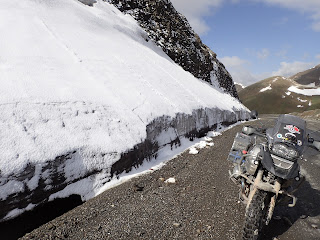 The evidence of fresh snow on the roadside explained the cooler temperature and as we got further down the beautiful colours, contours and textures of the landscape were an awesome site. We saw many nomad camps of yurts and caravans which added that authentic and picturesque touch to the already amazing views. 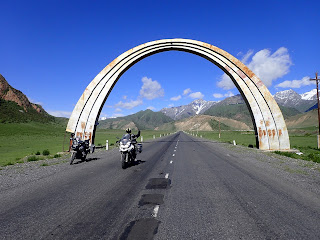 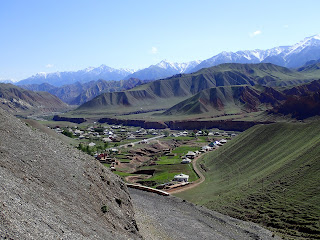 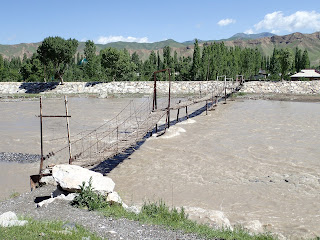 This bridge is still used by the locals to cross the river!