This is the day we had all been waiting for and probably the most important day of the trip as today we cross into China.
Now this is no ordinary border crossing as to take your own vehicle into China is not an easy process and often people are refused or just give up trying, and it is common for round the world travellers to bypass China or do it without theur vehicles.
This is why I and the other group members turned to GlobeBusters for their expertise to organise the compulsory guide, temporary driving license and registration for the bike, and get the route approved by the Chinese authorities which all takes time and good contacts!
But even then, it is not all plain sailing….


It was an early start to the day leaving the hotel in Naryn at 5:30am and riding as a group to the border.

As we went over the pass the temperature dropped to just 1 degree and when we arrived at one of the military check points I made use of the stop to connect my heated jacket and gloves!
The process at the Chinese border is somewhat of a disorganised affair. It seems like they have check lists to guide them but they don’t know what or why they are doing some of the things on the list, and it is just a case of ticking the boxes. For example, they wanted us to take our luggage of the bike and put it through the x-ray machine, just as you do in airport security. First they said everything in the panniers thinking we would just take a bag out and put that through. But when we said some of the panniers are just full of individual items they then changed their minds and said OK, only the luggage you can remove from the bike so most people just took a tank bag in. It was not as though anyone was actually at the x-ray machine checking anyway, just that we done something that meant they could puta tick in that box. We moved our bikes from here to there, and then again over to somewhere else and all the time no one including the border control staff really new why. Then we had to get the bikes x-rayed, but by this time we had already removed our personal luggage ready to put on the bus as we had been told that the bikes would have to stay in a secure compound overnight, so once again this didn’t get x-rayed but another box got ticked.

Then when we got to the secure compound, the security staff had that blank and confused look on their faces as if to say, ‘why are you brining your motorcycles in here?’ I guess they only normally see trucks so didn’t really know what to do with us. So eventually after another long wait, we all parked our bikes inside the compound and got on the bus to go to the hotel in Kashgar.
We were first told by our fixer that we would be collected at 9:30am the next day to go back and collect our bikes. Then as we reached our hotel, he said in a sheepish tone, ‘11am or maybe later’. We eventually got him to agree to 11am, however, when 11am the next morning came he said that it would now not be until 4pm and indeed that is the time the bus arrived once more to take us back to the compound. It took just over an hour to get back to the customs buildings but our bikes were not actually released until 8pm as the information had to be sent to a head office somewhere for approval and then once they approved it the top guy at the customs building had to sign it off. What a palaver it all turned out to be and Kevin said that this has never taken this long before, but had been warned about the new guy at the top making everything much slower now so this nonsense was not completely unexpected, but still a pain in the arse.

It was great to get the bikes back and ride back to the hotel in Kashgar where we had another day of rest the following day to look forward to. 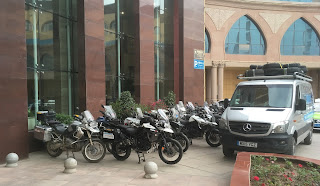