We left the luxuries of our hotel in Kashgar and headed south towards Tibet. Despite motorcycles not being allowed to use the express way, we seemed to get away with it and were not challenged even at the Police check points where most of the time they just waved us through. However, when we got to one of the check points we did have to show them our new Chinese registration for the bike and driving license for ourselves that we were issued to us in the morning.

The hardest part of the day was when we tried to get petrol as we were turned away from several fuel stations either because they only sold LPG gas or you had to have a permit to buy the fuel. At the last one we tried again we were told no but as we were about to leave and follow my two fellow riders that had already made a sharp exit, a policeman stopped me and asked me to follow him. 'Oh shit I thought, was I about to go off down to the local police station?' But no, he led me to another entrance of the garage that we had just been too and then got out of his vehicle and spoke to the people on the barrier. At first they just shook their head, then the guy with ‘SWAT’ on his back said something and all of a sudden the barrier went up and in I went. There was more shaking of the heads but again the SWAT guy sorted this and before long they were filling my tank with 95 grade petrol. Just as they were filling my bike in came my fellow two riders then a few minutes later a few more of our group arrived.

It turned out that our Chinese guide had spoken with the SWAT team a few minutes earlier as one of our motorcycle guides got stopped and called our guide for translation. Word went out on the radio to tell the tourists on motorcycles in town to go to this one particular fuel station and that they would be allowed to get petrol there.

It was warm for most of the journey but then got cooler as we climbed in elevation. I did manage to stop for a few photos along the way so that was good. 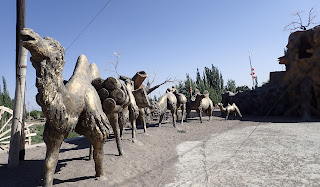 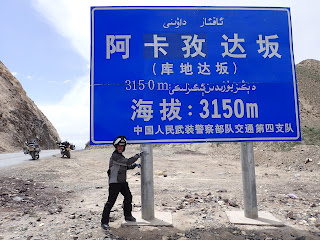 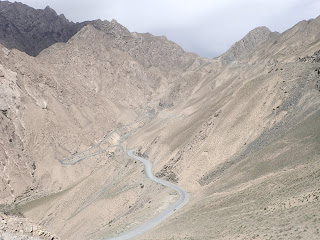 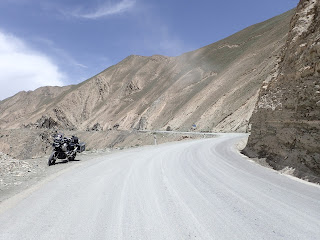 Due to isues that arose throughout the day and the fact that Kevin did not want us riding in the dark over the pass, it was decided that we would cut the days riding short. Once we arrived at the little town with known lodging were going to be we had to sit and wait for Kevin to arrive who then asked our Tibet guides as to where we was allowed to stay. I must admit the accommodation that we got was better than expected, although still no shower, and it did have a drop hole toilet outside.

That evening they served us up some food which was quite delicious, although no one actually tried the chickens heads or feet that were in the main bowl.
Posted by GP at 13:44