It was a very late start to the day as we discovered in the morning that one of the check points we went through the day before did not take our passport details so the van man Pete and the fixer Andy had to drive back to the check point and give them all the passports so that they could input the data into their system. Despite leaving at 7:30am, before most people were up, they didn’t get back until about 3:30pm so this meant we had to cut short our planned days ride by about 75 miles.
However, we got less than half a mile before having to wait at the first military check point of the day which cost us more precious time. 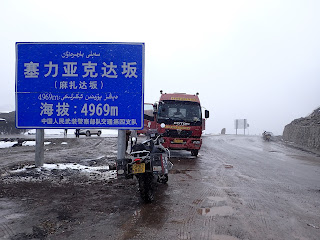 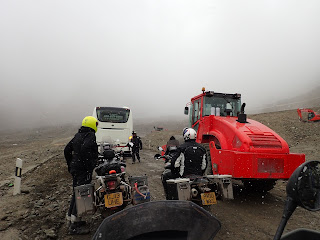 The next challenge was towards the top of the second pass as there had been a land slide which blocked the road. The trucks were queued back a long way and although we could ride down the side of them to the front, we had to wait until it was cleared A couple of our group attempted another track but one of them fell off so Kevin said we should all wait for the road to open which fortunately for us, wasn’t more than 20-30 minutes. The weather was closing in on us and as the clouds fell lower, it started to sleet on us, this combined with temperatures below freezing made for a gloomy few miles. Once we got further down it started to dry out as the temperature rose so better progress was made.

The next town had a nice new fuel station which served us some lovely 95 grade petrol and we also got accommodation for the night right opposite which was much better than the planned accommodation so that was a plus!
Three doors along was a restaurant which done us a great Chinese meal which is just what our bodies needed before getting into bed for a well earned sleep.