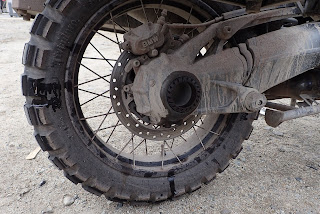 We discovered that my rear driveshaft outer oil seal was weeping oil first thing this morning. Probably due to the crap conditions and some dirt or sand has got under the lip. Dom said it would be a job to look into at the end of the day.

So today was another 10am start due to the low temperatures and possible freezing conditions of the road over the pass. In fact there was more than one pass today, the first being 5170m, the second being at 5398m and the third at 5248m
However, the first check point kept us waiting for an hour and 20 minutes and this meant another late start on a 300 plus mile day, and that is without doing the full mileage that was planned today which we will have to make up tomorrow. After Kevin went to chase up things inside the border control we got allowed to move through the barrier for about 50 yards to another area where we had to wait for our passports before riding off. 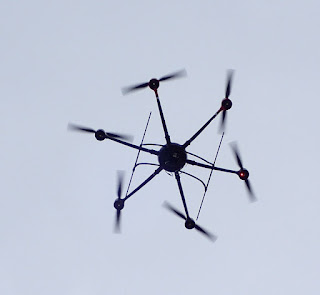 It was whilst waiting in this area that a very large drone rose from behind the security wall and hovered over us for a while. It became clear why after a few minutes when some gates opened and three vehicles appeared. It looked like an official car with a police escort front and rear which sped off in the direction we was going to be heading. I guess they wanted to leave before us, hence our delay. 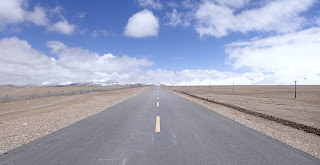 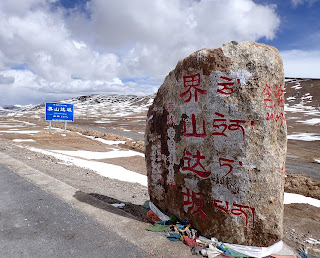 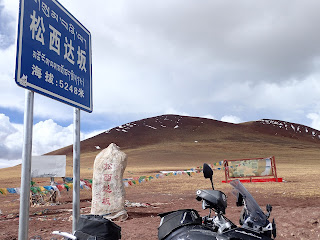 The highlight of the day was when we entered into Tibet and crossing our highest pass of the trip at 5380m. The Tibetan Plateau (also called ‘the Roof of the World’ is about 4500m but once on it we stay at this altitude for several days, and so far none of the group have developed any serious altitude sickness so that is a good thing, although we certainly notice the thinner air up here. 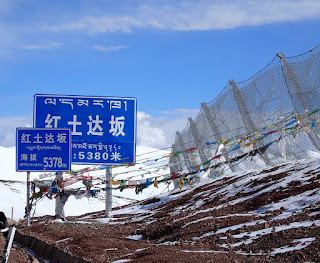 Once in Tibet the mountain views were amazing and I stopped several times for photos, although I would have stopped more if it wasn’t for the fact I was often in last place with the van on my tail, even though two of the riders had flat tyres and needed assistance from the van.
We didn’t get the planned accommodation when we arrived at our destination as the police said we couldn’t use it, but instead the group got split between two different places and the one I stayed in was utter crap. Even the drop toilet was full, but that is all part of the experience guess, though it was not on the bucket list!

Just after I got there Dom and Pete had a look at my weeping oil seal and cleaned under the lip, then cleaned and replaced the outer ring and said we need to keep an eye on it over the next few days.